The availability of ultra-low-power ICs has led to a proliferation of sensor-based circuits and systems which require only microamps or milliamps for operation. These products are used for environmental monitoring (safety, temperature, earthquakes), asset tracking, energy/power metering, and medical monitors, as a few examples.

Many of these units need to function for ten, twenty, or more years, yet it is often difficult or impossible to access them for battery replacement. Changing batteries is also often cost prohibitive.

As a result, designers must give due consideration and decide among options, or a combination of options, that include:

This article will look at the various options available to a designer and their trade-offs. In the process, it will introduce related solutions and their use fromTadiran, Analog Devices, KEMET, and Texas Instruments.

Is energy harvesting a smart option?

Whether it’s smart or not, of course, depends on the application. For sure, energy harvesting is an attractive and widely used technique for providing power at what at first seems to be little or no cost. Its four key elements are:

The first harvesting challenge is to identify the most viable energy source to be tapped. Common sources include solar, wind, hydro, thermal differential, waste heat, or magnetic induction. Another source is some form of minute vibration or motion, which itself can be induced by walking, building geo-vibration, or motor vibration.

It’s important to keep in mind that while the terms energy and power are often used interchangeably, particularly by the general public, they are different, though related. Energy is the ability to do work, while power is the rate at which energy is collected or expended. Therefore, energy is the time integral of power, while power is the time derivative of energy. In a harvesting system, the amount of collected and stored energy must be equal to or greater than its power integral, or the system will not have enough power to function long-term. In other words, energy can’t be expended in the aggregate as power at a higher rate than it is collected over time.

Once the energy source to be harvested is identified, a transducer is needed to capture and transform it into electrical energy. This transducer can take many forms: a microturbine, a solar cell (or panel), or a piezoelectric crystal are just a few possibilities. The next step is to decide how to store this erratic, often unpredictable, and usually small amount of energy so it can be drawn from as needed to power the electronics.

Battery, supercapacitor, or both?

In general, standard (non-super) capacitors can deliver large amounts of power but store only a relatively small amount of energy per unit volume. In contrast, batteries can store larger amounts of energy, but have lower power ratings. Between the two are supercapacitors, which strike a balance between energy versus power.

Compared to batteries, supercapacitors have a number of advantages:

For example, the KEMET FC0V474ZFTBR24 is a 47 millifarad (mF) supercapacitor in a small, sealed can measuring 10.5 millimeters (mm) high and 8.5 mm in diameter, with a 3.5 volt nominal rating (Figure 1). In the unlikely event of seal leak, only harmless water vapor (a gas) is emitted as the result of the phase-state transition of the liquid water in the electrolyte (diluted sulfuric acid) to gas.

Rechargeable batteries can be used in some longer-term situations and are best for applications where the current drain is low but relatively constant, without high peaks and with low duty cycles. Some designs use a pairing of a rechargeable battery with a supercapacitor, with the battery trickle-charging the capacitor, which in turn provides peak load current.

For most longer term applications, lithium-ion (Li-ion) chemistries are the best choice among the many available standard chemistries with respect to electrical performance attributes, as well as energy density by volume and by weight.

However, there are important differences among the various lithium chemistries related to attributes such as output voltage, charge/discharge characteristics, voltage versus remaining capacity, operating temperature range, and the number of charge/discharge cycles. The latter, which like other battery specifications, is also dependent on the depth of discharge per cycle. A high-level summary of key characteristics of two widely used secondary battery chemistries – nickel-cadmium (NiCad, or NiCd) and Li-ion – as well as two basic bulk capacitor types, is shown in Table 1. 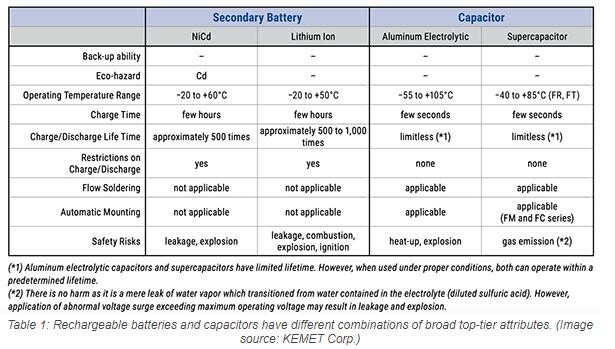 It’s simple in concept but difficult in practice to determine the needed milliamp-hour (mAh) capacity rating of the energy storage element for applications requiring extremely long duration. While the first-level analysis is based on the integral of the needed power including quiescent, steady state, and pulsed modes, there is more to think about when designing with these devices. Issues such as losses due to internal equivalent series resistance (ESR) and temperature related degradation, are but two of the various factors that must be considered. As a result, careful study of the battery or supercapacitor data sheet and its numerous graphs is required.

Regardless of whether a battery, supercapacitor, or both in tandem is chosen, management of the energy flow from the harvesting transducer to the storage element(s) and then its delivery to the load is a critical design issue. This function must ensure that the harvested energy, usually a very small value, is transferred to the storage element with maximum efficiency, while at the same time not shortening cell life through overcharging. The management function must also meter current as needed to the load while consuming very little power itself, and it must manage the discharge cycle to avoid deep discharge, which degrades the number of full capacity battery charge/discharge cycles.

On the output side, the manager must also implement DC/DC regulation, so the load rail stays at a constant voltage despite variations in storage element voltage and load demands. Depending upon the battery or capacitor chosen, in the context of the load requirements, this regulation can be a buck or boost mode function. It can also be a combined buck/boost regulator when the storage element output voltage crosses from being above the desired DC rail to below it.

For example, Analog Devices’ LTC3331EUH#PBF is a nanopower buck/boost DC/DC regulator with an energy harvesting battery charger that is optimized for the higher source voltages of solar cells (Figure 2). However, it can also be used with lower voltage sources to form the foundation of a complete energy harvesting solution with battery backup. Housed in a tiny 5 mm × 5mm QFN-32 package, the LTC3331 features dual inputs (for solar and piezo as harvest sources, for example), and a single-output DC/DC regulator which prioritizes between the two inputs.